Sweden - on the train to Stockholm

august 14, 2008
This trip, Anne covering The Barentsregion 2008, comes to an end. I am on the train from Sundsvall to Stockholm, and I can't tell you I look forward to going back to the same old streets of Oslo. Well, of course, Oslo is a nice city, and there are lots of nice people, but sometimes I am just gettin' fed up, and I am not sure if I am not still fed up with Oslo, the way I was before I went on this trip, and the trip before this one. Guess I'll find out soon, but tonight is Stockholm.

Well. To sum up, this has been a really great trip, and I've met dozens of nice people on my way from Bodø to Umeå. In Oulu, Janne asked me: What is the main difference between Finnish people and Norwegians? The language, I replied. And I have never seen Norwegians drink a big glas of milk in the pizzahut after leaving the nightclubs, but I guess, that is not a bad habit, and I have no idea if this is something most Finnish folks do, or if it was just those guys I met who did it, and who knows if they do it once a year, or every week.

I also noticed that people in Finland, at least in Oulu and Rovaniemi, wait for the green man before crossing the street. I walked ahead, and started wondering maybe you had to go to jail or something if you went when lights were red, but no, people are just being nice to the green guy. Well, I don't get it. He's just made of light.

And, after thinking some, I am pretty sure that people don't drink milk after dancing everywhere. That must be something very Finnish.

When in Rome, do as Romans. When in Oulu, do as Oulu-folks. I met Mikko from Oulu, and made him drink a whole lot of milk. I am not sure if he was used to it. Maybe he thaught: these funny Norwegians drink milk after dancing, that is quite strange, but I just tried to act Finnish;) 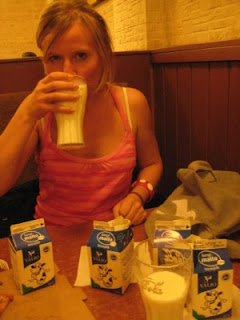 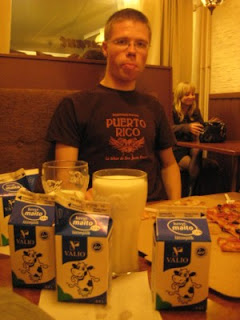 Mikko and me drinking milk and eating pizza in Oulu, Finland.